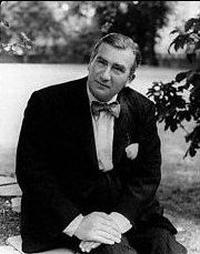 It was Ray Edwards – at the time buyer for Tower Records’ legendary, late, lamented classical department on West 4th and Broadway – that recommended I check out the recordings of British-born, Russian-raised conductor Albert Coates (I believe we’d been talking about the ever-popular “Toscanini vs. Furtwängler” debate and my having come down decidedly on the side of Willem Mengelberg).

I did – and was mightily impressed by the exuberant , heart-on-sleeve music-making and rhythmic daring he brought to standard repertoire, especially Russian romantic-era music.

So hats off to Pristine Audio for initiating a new series of download-only Coates reissues, from often very rare 78 sources and again transferred by Marston, who is himself a huge Coates enthusiast. The source material has been thoroughly declicked and noise levels are quite effectively tamed. Three releases, drawing on both acoustic and electrical material, are already available, with more to come in the following weeks. The first release combines music of Bach and Beethoven, including the first electrical recording of Beethoven’s Ninth Symphony (sung in English) in which Coates has few rivals in ratcheting up the tension and rhythmic force of the first two movements or conveying a propulsive cantabile in the third movement. The singing is not to my taste – but does open a window on the vocal style among British singers of the era. The second program contains acoustic recordings of Russian repertoire. In 1924, Gramophone had hailed the Tchaikovsky Fifth Symphony featured here as pretty much the most successful symphony recording ever, and again Coates spares little in the way of visceral excitement. Coates’s Francesca di Rimini has an almost cinematic impact, and there’s charm aplenty in Borodin’s Polovtsian Dances, complemented by a small vocal ensemble. The third release pairs Mozart’s Symphony No. 41 (and check out that ultra-swift tempo in the first movement that sounds similar to a couple of period instrument performances that would appear some six to seven decades later) with Beethoven’s Seventh Symphony, including both the latter’s abridged third and fourth movements and the complete versions recorded a year later.

If you’ve never listened to acoustic recordings, fear not:  they will not make your cerebral cortex explode or your ears bleed (especially when played back from good copies with proper equalization and at the correct speed), and you will quickly get used to the medium’s resonance-related distortions and frequency limitations (the top two to three octaves of the human hearing range are all but missing). You should also prepare for a few “performance practice” shocks having a good deal to do with the technology and the somewhat cramped rooms used to record acoustically; these include a comparatively small string contingent (often using Stroh violins), ubiquitous tuba doubling of the double bass lines and string lines doubled by horn or clarinet, just to name a few. You’ll also get a good helping of interpretive conventions of the period – and, in the case of Coates’s Russian works, conventions of phrasing and tempo influenced by performances during Tchaikovsky’s lifetime.

I strongly recommend them all (and yes, even recordings this old do sound better in FLAC than .mp3, so spring for the lossless versions) – but if you have an interest what acoustic recordings have to offer, early 20th-century performance practice, and Russian music, the second release is especially recommended. I for one, intend to get the whole series.