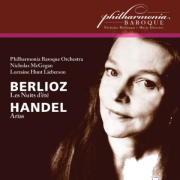 Regular readers know that I’m a fan of the late Lorraine Hunt Lieberson. While she may have been gone nearly five years, a number of live recordings have been released since her untimely passing that strongly complement her studio output.

Avie released a superb Bach/Handel program drawn from Boston’s Emmanuel Music concerts, and two discs containing live material from her Wigmore Hall recitals have appeared on their eponymous label. Now, a program drawn from two 1990s concerts with the Philharmonia Baroque Orchestra conducted by Nic McGegan has appeared on the orchestra’s own label.

Lieberson made a huge impact at the Metropolitan Opera as Dido in their 2002-3 season performances of Berlioz’s Les Troyens, and it should come as no surprise that her atmospheric, dramatically varied approach to the composer’s Les Nuits d’été, assembled from concerts in November 1995, is completely convincing — as is McGegan’s colorful shaping of the orchestral accompaniment with some of the best period instrument players on the international scene. I can guarantee that you’ve never heard Berlioz like this.

The seven Handel arias recorded at an October 1991 concert were performed days before a harmonia mundi USA recording session for the “Arias for Durastanti” CD (recorded many years prior to Lorraine’s marriage to Peter Lieberson, when she was still known as Lorraine Hunt). The studio recording captured Lorraine’s voice at its virtuosic best, and she brought plenty of character to each of the arias — but the live recordings ratchet the drama up a notch, with blazing performances from both soloist and orchestra that overshadow some technical issues with the archival tape (most notably some conspicuous print-through from the analog tape medium).

Balances are very good throughout. Lorraine’s fans should not hesitate to snatch this one up — and if you like the vocal music of Berlioz or Handel, you will not want to be without it.