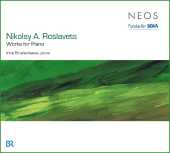 A surprisingly good confluence of solo piano music from the former Soviet Union has found its way to the CD, SACD, and DVD formats in 2009. Four of these releases are of particular merit, and one of them made my Best of 2009 list.

Nikolai Roslavets was already an accomplished composer and all-around left-wing firebrand within the “Russian Futurist” movement when the Bolsheviks staged the revolution that gave birth to the Soviet Union. With the establishment of the Soviet state, he quickly became an influential teacher and publisher, but by the mid-1920s became a target of politics within the government and the musical bureaucracy, and soon became persona non grata in a nation whose birth he had wholeheartedly supported; by the time of his death. his daring musical output had been nearly successfully “disappeared.” I first became familiar with his music in the late 1980s, when a handful of his compositions started turning up on CD. Renewed interest in the music of the Russian Futurists followed the fall of the Soviet Union through the efforts of such prominent ex-Soviet musicians as Gidon Kremer.

Pianist Irina Emiliantseva‘s recently released collection of solo piano works by Roslavets on NEOS is very fine indeed,  Emiliantseva successfully evokes the “machine-age” sound of these works, but also succeeds in bringing Scriabinesque atmosphere to many of the works, an important facet to these works that other pianists seem to have glossed over. And that’s not to say Emiliantseva downplays the harmonic density of these works; Roslavets was experimenting with his own approach to twelve-tone composition, and Emiliantseva lets the sometimes thick dissonances speak for themselves yet brings great satisfying coherence to music that can seem in collision with itself in lesser hands.

At the opposite end of the Soviet era chronology, Galina Ustvolskaya composed a small but impressive body of austere music distinguished by an inimitable, daunting intensity — Dutch music critic Elmer Schönberger aptly referred to her as “the lady with the hammer.”  Ustvolskaya lived to see the end of the Soviet era, and with it her creative output ended with a daring Symphony No. 5 “Amen,” completed in 1990 and written for six players: voice, oboe, trumpet, tuba, violin and percussion. She was greatly admired by no less a figure than her composition teacher, Dmitri Shostakovich; Ustvolskaya broke stylistically from anything remotely resembling Shostakovich in the 1950s, and the historical evidence shows that he not only remained a champion and defender of her iconoclastic works until his death but strongly valued her friendship and opinions.

Munich-based pianist Sabine Liebner has made herself a reputation as a top interpreter of the “New York School” through excellent releases on Oehms Classics and NEOS, and she proves to be a convincing exponent of Ustvolskaya’s solo piano works. Liebner connects on an emotional level, though not quite with the almost vicious delivery Frank Denyer brought to the later works in his acclaimed and (naturally) out-of-print Conifer Classics disc of the six sonatas from the mid-1990s. The approaches are so different – and valid – that one is hard-pressed to pick between the two on that basis alone, but the Liebner has the advantages of more music (spread out between two discs). better sound (and great surround sound in SACD mode), and a piano that, unlike Denyer’s, remained well-tuned and well-behaved.

Dmitri Shostakovich remains the most admired of all Soviet composers, and while he is best known for his more popular symphonic works, he composed a substantial body of music for the piano, including the 24 Preludes and Fugues, Op.87. Modeled on the form used in Bach’s Das Wohltempierte Clavier and written in two books of twelve preludes and fugues each, the work was slammed by Soviet music bureaucrats as “formalist” music that aped the works of a religious composer; the work was nevertheless published and premiered by Tatiana Nikolayeva, to whom the work is dedicated.

Nikolayeva recorded the work three times; the latter two recordings are readily available on CD. Earlier this year, medici arts issued Nikolayeva’s previously unavailable television recording of the cycle, first broadcast in two installments during December 1992 on the BBC. Sound is nearly as good (and far less cavernous) than the Hyperion studio recording and a bit better than the Soviet recording; the performance unfolds in a more spontaneous manner than that on the Hyperion set, and, on a single DVD, this disc has the advantage of being significantly cheaper than the CD alternatives.

Even more surprising is a new CD recording from Hänssler Classics of the cycle from pianist Jenny Lin, whose approach topples the hegemony of Nikolayeva’s recordings. It can be argued that Nikolayeva was very close, perhaps too much so, to the work’s origins and premiere, and imbued the cycle with a few layers too many of solemn gravitas. Lin has no compunctions about drawing the modernism, quirkiness, individuality and pianistic color in these works – and nevertheless projects each prelude-and-fugue pairing as a satisfying whole. Lin akso draws out of the cycle clear portents of sounds that would be favored by the Western European avant-garde and wave of post-Soviet composers in Eastern Europe. This daring rethinking of this major piano cycle is easily one of the ten best new recordings of the year. Shostakovich fans and pianophiles should not hesitate to buy this recording.