Two decades ago, Leslie Gerber’s enterprising New-York-based label Parnassus began issuing a series showcasing previously unreleased and rare recordings from Sviatoslav Richter made throughout the Soviet Union and its satellites in the 1950s – the decade before the explosive 1960 debut American tour that elevated him to a legendary status that never wore off. Over a period of several years, thirteen discs were issued in seven volumes. They were easily obtained at the big-city Tower Records stores in the USA,  but were often difficult to find abroad, and a bit expensive where they could be found.

Parnassus is now distributed by Musical Concepts, my friend Todd Landor’s label/distribution unit/production company. Late last year, after Todd had acquired the Colorado Quartet’s Beethoven recordings from Parnassus, I suggested that we compile a Richter 1950s retrospective  for digital-only release.

A little over four hours of music was selected from the near sixteen hours of music on the original discs for Sviatoslav Richter – The Early Years: Rise of a Virtuoso Legend. The choices were difficult, as the set is so consistently excellent from an artistic standpoint, but several major works for which Richter had an affinity were obvious choices, particularly Prokofiev’s Piano Sonata No. 7, Schubert’s Piano Sonata in B-Flat Major, and Mussorgsky’s Pictures at an Exhibition (a very different interpretation than the well-known Sofia recital from 1959 issued by Philips back in the day),

The original Parnassus masters were generally good, but most benefitted from pitch stabilization to remove flutter from analog tape sources. A few were re-equalized and in several cases obtrusive lighting and electrical hum were abated; in a couple of instances, very slight noise reduction was applied.

And now, it is available from Amazon – for now, it is priced at under $9 in the USA and 8 quid in the UK. 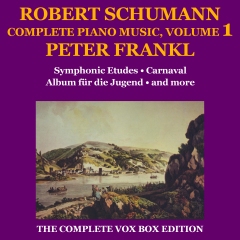 Robert Schumann‘s piano music never made much of an impression on me when I was in high school or college; it wasn’t until I began to delve into the music of Johannes Brahms as a student and listener that I began to work my way back to the music of his mentor and take a careful listen.