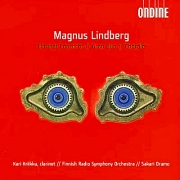 My review of the New York Philharmonic Chamber Ensemble’s terrific Saturday evening concert at the Metropolitan Museum of Art was posted to Classical Source yesterday, but I wanted to add a few personal observations here.

The surprisingly large percentage of twenty- and thirty-something attendees caught me completely by surprise. An impressive number of attendees also had “M” badges, a sure sign they’d been taking in art exhibits. I chatted up a young couple with a downtown hipster vibe who said they had attended Magnus Lindberg’s Kraft earlier this season, and they quite enjoyed the current concert. The “kids” were mighty impressed with Gérard Grisey’s Quatre chants pour franchir le seuil — and soprano soloist Barbara Hannigan. I didn’t see some of the older new music aficinados I usually run into at these sort of events, but did see a few composers and performers of note in the audience.

As the NYPhil’s resident composer, Lindberg now has an impressive number of local adherents, but it’s a sure bet that many attendees were getting their first taste of Grisey. He is considered to be one of the founders, along with such figures as Hughes Dufourt and Tristan Murail, of “spectral” composition, a label he would disown a few years before his death (Anthony Cornicello has written a scholarly and thorough introduction to spectral music [.pdf]). Grisey’s influence on Lindberg is evident in Kraft, written in 1983, but also in later works in which Lindberg adapted a more harmonic, accessible style.

For those of you unfamiliar with either composer, here are a couple of recordings hat will allow you to dip your toe in each pool:

For Lindberg, I’d start with his exuberant Clarinet Concerto, composed in 1992 for the amazing Kari Kriikku. His recording with the Finnish Radio Symphony Orchestra conducted by Sakari Oramo is coupled with the Chorale for orchestra (2002) and Gran Duo for winds from 1992, and is still in print on Ondine.

The music of Grisey — who died in 1998 at the age of 52 — is a lot harder to find on this side of the Atlantic. Quatre chants pour franchir le seuil has been released on the German Kairos label, but I’d opt for Le Noir de l’Etoile, composed for Les Percussions de Strasbourg and released in spectacular surround sound on SACD by the French Accord label. Both can be obtained from UK online store Presto Classical.