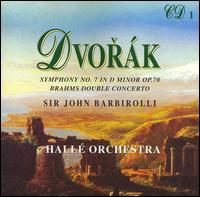 It’s been a while since I’ve heard the Barbirolli/Hallé Dvo?ák Symphony No.7 — recorded in 1957, originally issued on Pye and most recently available in an ultra-budget 3-fer from Disky. In some respects it was much as I remembered: the sound was both overmiked and very congested, and the playing was sometimes a bit too out of tune. The performance, however, was more satisfying than I had recalled: enormously energetic, strongly dramatic, and filled with more than the requisite number of “goosebump” moments. I’m very glad I gave this one another listen.

Shortly after the 1962 release of Otto Klemperer’s EMI/Columbia (UK) recording of Mahler’s Symphony No.4, musicologist Deryck Cooke recorded a program for the BBC Third Programme comparing Klemperer’s recordings to others, particularly Bruno Walter and Willem Mengelberg, in search of an “authentic” interpretive approach to Mahler.

END_OF_DOCUMENT_TOKEN_TO_BE_REPLACED

Stokowski recalls the both the world premiere and American premiere of the work; from an interview recorded in the late 1960s. (Podcast is after the break.)